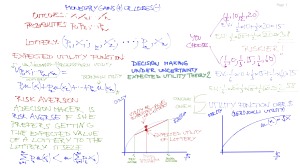 For class: Bring an example of a decision you have made (large or small) that involved uncertainty. Can you model it as a choice between lotteries (or a certain outcome and a lottery)? Is there more than one way to model it as a lottery? How did you find the probabilities of the outcomes? What about the payoffs? Do you think you showed risk aversion with your choice? 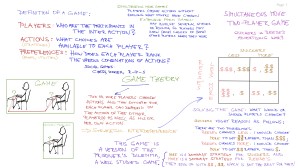 For class: Bring an example of a strategic situation that you have encountered. Describe it as a game. Do any of the players have any dominant strategies? In addition, bring an example of a game that you believe is a prisoner’s dilemma (but not the classic example involving prisoners).  Your game could be from everyday interactions, or something you read in the news recently–or anything else. Your game may involve more than two players.