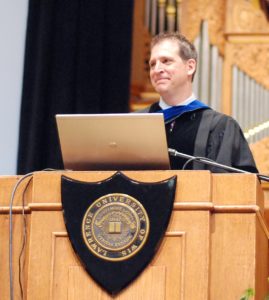 I am the John R. Kimberly Distinguished Professor and an associate professor in the department of economics at Lawrence University. My research interests are in risk regulation and public policy, particularly in areas of energy and the environment.

I came to Lawrence in 2009 after eight years at Carnegie Mellon University, six as executive director of the Center for the Study & Improvement of Regulation (CSIR).  At Carnegie Mellon I taught courses in the Department of Social & Decision Sciences and for the masters program in Engineering & Technology Innovation Management (ETIM).  I maintain a connection as an adjunct associate professor in the Department of Engineering & Public Policy.

In 2015 I received the Faculty Convocation Award for distinguished professional work, and gave a talk on climate change at that year’s Honors Convocation.  I have two other talks available online: Grinnell College’s Rosenfeild Symposium on corporate social responsibility, and a Freshman Studies’ lecture on Thomas Schelling’s Micromotives & Macrobehavior.

In Fall 2016 I was a Visiting Scholar at the Ostrom Workshop in Political Theory & Policy Analysis at Indiana University.

I was named to the John R. Kimberly Distinguished Professorship in the American Economic System beginning in 2016-17.   The Kimberly-Clark corporation established the Chair in honor of its former CEO and director in 1977.  I am the third professor to hold the Chair, following in the footsteps of Jim Dana and Marty Finkler.

In 2021, Lawrence University interviewed me on the snow-covered Main Hall Green.