Winner of the 2017 Excellence in Teaching Award at Lawrence University 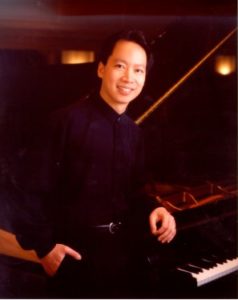 ANTHONY PADILLA is a professor of piano and chamber music at the Lawrence University Conservatory of Music in Appleton, Wisconsin.  An American pianist of Filipino-Chinese ancestry, Padilla receives public and critical acclaim for performances of “enormous freshness, vitality, and poetry” (Chicago Tribune).  Since his debut with the Seattle Symphony in 1983, he has become a popular guest artist throughout North America, Europe, and Asia.  Highlights include solo and collaborative appearances at the Ravinia, Chautauqua, Schleswig-Holstein, Cascade, Bay View, and San Luis Obispo Festivals.  After his New York debut recital, the New York Concert Review called him “a strong-willed, steel-fingered tornado:  he plays the piano with absolute authority and gives new meaning to the idea of ‘interpretation’ to the extent that the U.S. Patent Office might well grant him a number. Nobody could copy him.”

A protégé of the legendary pianist Jorge Bolet at the Curtis Institute of Music, he completed his graduate studies at the Eastman School of Music, where he served as teaching assistant to Jeffrey Kahane and Natalya Antonova. Awarded the prestigious Beethoven Fellowship by the American Pianists Association and top prize at the Concert Artists Guild International Competition, he is also a laureate of the Naumburg, Bachauer, Kapell, and Cleveland International Piano Competitions.  He is a founding member of the Arcos Piano Trio, which was recently awarded an Artistic Excellence grant from the National Endowment for the Arts to commission and record chamber works by Latin American composers.

A nationally certified member of the Music Teachers National Association, he is a popular adjudicator and presenter, and his students regularly earn top prizes at state, national and international competitions.  His lectures on the Element of Humor in Classical Music have stirred much interest at the MTNA National Conference as well as at state and regional conferences.  His recordings include the premiere of Coleridge-Taylor Perkinson’s Second Sonata for Piano, and chamber works by American women and Latin American composers with the Arcos Trio.  His popular seminars have included surveys of The Great Pianists, The Piano Trio, Musical Humor, Piano Transcriptions, Piano Teaching in the 21st Century, and the Piano Works of Chopin, Robert Schumann, and Franz Liszt.