Republicans and Democrats are strongly divided over what should happen to the ACA.  Most Republicans have identified the repeal of the Act as a high priority.  Most Democrats seek to reform the Act by addressing gaps and errors in the legislation.  Such a characterization of these battle lines is much too simplistic.  In some cases, the proponents share the same goals but offer different strategies and policies to achieve them; in others, the proponents disagree about both goals and policies.  This blog posting seeks to illuminate a few of these distinctions.[1] 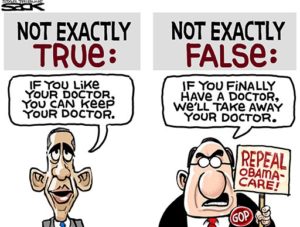 This goal tends to be shared by many proponents from both parties; however, they disagree about the means for achievement.   Republicans typically suggest that policy should provide a refundable tax credit for those without employer-arranged coverage; they also would fund to a limited degree high risk pools in each state.  Furthermore, many Republicans would repeal the individual mandate and its related penalties.  In their view, purchase should be voluntary and a tax credit should be available for all but not be tied to purchase through market exchanges; given that medical expenses increase with age, the credit should also be age based. The ACA does provides a tax credit inversely related to income, available on a monthly basis, and usable only for purchasing health insurance on the state or federally facilitated exchanges. Democrats would expand the program to cover more of the 30 million or so not presently covered.

Neither view seriously addresses to what degree insurance coverage provides adequate access to medical services.  Such access is a primary reform objective for Democrats. Some Republicans, Senator McConnell for example (http://www.npr.org/sections/health-shots/2012/07/27/157439331/gop-says-coverage-for-the-uninsured-is-no-longer-the-priority), have begun to back away from the access goal all together.

Proponents in both parties share this goal; however, they suggest different means to accomplish it. Republicans want to cap the tax-exempt amount of the insurance premium with amounts spent above the cap subject to the income taxation.  Democrats, as reflected by the ACA, also employ the cap idea; however, premiums above the cap face a 40% excise tax – known as the “Cadillac” tax.

Both approaches exempt a substantial share of insurance premiums from taxable compensation.  Current income tax policy exempts insurance premium payment, for both employer and employee shares; this results in two to three hundred billion dollars per year of foregone federal income tax revenue.  On both equity and efficiency grounds, many economists argue that the income tax exemption should be replaced with a tax credit; furthermore, many suggest that such a tax credit be inversely related to income, as exists for the credit currently provided in state and federally facilitated exchanges.

Proponents do not share this goal.  Republicans would eliminate many existing mandates as well as the caps on out-of-pocket pay for individuals or families and let markets determine what to provide.  In particular, pre-existing conditions clause prohibitions would only remain for those who have continuous insurance coverage.  Clearly, strong prohibition against any type of pre-existing condition clauses forms a major part of policies endorsed by Democrats.  In addition, Republicans would like to see the allowable range of premiums based on age rise from a maximum of the top rate three times the bottom rate to a 5 to 1 ratio; as noted above, age-related tax credits would help reduce the effect on older purchasers.

Regulation of health insurance and medical care markets is a much more complex endeavor than utility regulation.  The policy challenge is to employ regulatory mechanisms consistent with the desired goals without dramatically increasing cost or reducing the incentives for productive innovation. More on such mechanisms below.

Health plan choice is a partially shared goal.  Some Democrats prefer socializing the health plan process through some type of single payer plan (similar to what exists in Canada or a Medicare-for-all plan.) Republicans typically would like consumers to be able to purchase plans licensed in states other than the own (as well as in their own state).  Some also tend to support funding a high risk pool to increase access to insurance (see goal #1 above.) Democrats typically prefer state-based purchasing since insurance regulation is done at the state level.  The ACA includes temporary reinsurance and risk corridor programs to assist those health plans offered through the exchanges that draw more expensive enrollees than common in each marketplace.  In addition, it also includes permanent risk adjustment mechanisms that take a portion of the revenue from insurers that enroll less expensive members and transfers such funds to their more expensive counterparts.  The implementation of these transfers has not been fully funded and is somewhat dependent on high levels of enrollment of healthy people through the exchanges.  Some insurers, many of the cooperatives in particular, have lost significant income from participation, especially if they have been identified as having relatively low risk enrollees and, thus, some of their revenue must be transferred to other insurers.  Some major commercial insurers have reduced their participation in the exchanges as a result. (http://www.modernhealthcare.com/article/20160806/MAGAZINE/308069989?utm_source=modernhealthcare&utm_medium=email&utm_content=20160806-MAGAZINE-308069989&utm_campaign=am.)

Prior to the opening of the exchanges in 2014, the individual insurance market was relatively thin and expensive for individuals.  The ACA envisioned a $20 billion reinsurance pool along with the risk corridor limits as transitional mechanisms until the exchanges stabilized.  The available funding for the pool has ended, but few analysts view these markets as stabilized given the large change from year to year in both enrollees and insurers.  The number of enrollees in individual plans, however, has gone from just over 4 million in 2013 to 12.7 million in 2016.  (See Hall and McCue http://www.commonwealthfund.org/publications/issue-briefs/2016/jul/the-affordable-care-act-and-health-insurers-financial-performance). Despite this three-fold expansion, premiums in the exchanges in 2014 were 10-21 percent lower than 2013 individual market premiums and even with expected 2017 increases will be lower than without the ACA. https://www.brookings.edu/research/affordable-care-act-premiums-are-lower-than-you-think/?utm_campaign=Engelberg+Center+for+Health+Care+Reform&utm_source=hs_email&utm_medium=email&utm_content=32433757.

Though a shared goal, the means offered by Republicans and Democrats to reach this goal differ markedly.  Republican proponents want states to have maximum flexibility in shaping their Medicaid offerings for the various eligible groups (singles, couples, families, etc.); the only role for the federal government would be to provide block grants to states based on population, income, or number of eligible residents.  This approach aims to limit the contribution from the federal tax base. In contrast, Democrats want the federal government to have a much larger role in determining both eligibility and benefits with the federal revenues used to fund expansions.  Despite having a similarly broad objective, Democrats and Republicans envision very different programs in terms of both who is covered and for what.

Since the ACA law covers well over 900 pages, many provisions are not addressed here.  This posting seeks to illuminate where Democrats and Republicans might find common ground and where they are unlikely to do so.  Furthermore, given the instability in the exchanges in many states, reform of the 3 Rs – reinsurance, risk corridor, and risk adjustment – will be a priority if the exchanges are to be stabilized and survive.  (See Adelberg and Bagley’s recent posting on the 3 Rs http://healthaffairs.org/blog/2016/08/01/struggling-to-stabilize-3rs-litigation-and-the-future-of-the-aca-exchanges/ .)

[1] Insights in this posting come from a variety of sources, but the AEI document entitled “Improving Health and Health Care” (http://www.aei.org/publication/improving-health-and-health-care/) serves as the primary source for Republican views and Emanuel’s book Reinventing American Health Care provides the basis for Democratic views.  Drew Altman, president of the Kaiser Family Foundation has also opined on this subject in a recent WSJ opinion piece. (http://blogs.wsj.com/washwire/2016/06/07/the-fundamentally-different-goals-of-the-affordable-care-act-and-republican-replacement-plans/.)