The size of the U.S. Federal government debt has been commonly cited as a major concern for the future of the U.S. economy.  Some view it as  burden we have and will continue to place on our children. 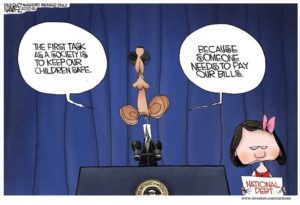 Others believe that the current generation bears the burden by either holding governmental securities rather than investing in the private sector or by the current generation increasing its savings to help their progeny with the prospective burden.  A third view suggests that the debt can be shifted onto foreign holders, which we certainly have done in recent decades.

This post, however, does not attempt to assess the nature of burden sharing; it seeks to highlight the nature of prospective increases in the debt level (relative to GDP) and why such rises matter.  Consider the chart below: 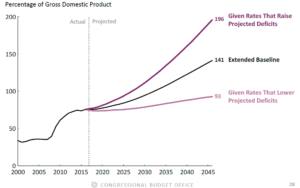 The Congressional Budget Office’s median estimate for debt to GDP in 2046 is 141%.  This assumes the following:

Clearly, satisfaction of these median estimates is not a given.  Some economists have argued that labor productivity rate could fall well below 1% and that U.S. Treasuries could return to a more “normal”  3% or higher.  Given the increase in the number of residents covered by Medicare and Medicaid, a 0.9% excess gap in spending also seems optimistic.  Pessimistic estimates for the key variables indicated above yield a CBO projection of a debt to GDP ratio of almost 200 percent.  That would be higher than all high income countries today with the exception of Japan.

The work of Carmen Reinhart and Kenneth Rogoff (including This Time is Different: Eight Centuries of Financial Folly) suggests that when debt to GDP rises above 90% then GDP growth begins to fall significantly (approaching 1% per year.)  Clearly, European countries with debt to GDP ratios above 100% (which presently includes France, Greece, Italy, Portugal, and Spain – see World Debt Clock) have been economically stagnant in recent years.

Given the above prognosis, will debt undue the U.S. economy?  To avoid economic stagnation long term, the U.S. must engage in some combination of the following actions: restrict benefits paid out for Social Security and other entitlement programs, expand taxes, increase income through either more work hours or higher labor productivity, make more efficient use of medical care, or induce our population to be much healthier.  One should not, however, view debt reduction as an immediate threat; the U.S. should employ debt in ways that make the labor force more productive such that the benefits of debt exceed its costs. (For a more complete presentation on this topic, see Will Debt Undue the U.S. Economy? (Talk given to the Oshkosh Rotary Club, September 21, 2016) .)