Everyone has heard about free radicals, the compounds that get in our bodies and cause trouble, like heart disease and cancer. They do this because they are highly reactive: they can and will react with most any kind of bond. This reactivity is due to their unpaired electrons, the very thing that defines them as radicals. Persistent organic radicals, however, are compounds that have been known since Gomberg discovered the “trityl” radical in 1905, and are not reactive like nasty free radicals, because they have been designed to prevent reaction with other molecules. There are several known persistent organic radicals, and in the Sazama group, we are primarily investigating radicals based on two frameworks: triarlmethyl (trityl) and bis(diphenylene)phenylallyl (BDPA). 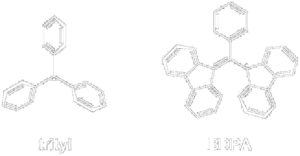 Our work involves creating new persistent organic radicals which contain chromophores within the doublet electronic state, giving rise to luminescent radicals – compounds that emit light and contain an unpaired electron. The proposed radicals are elaborations of the trityl and BDPA scaffolds, but feature new pieces within the molecules that impart luminescent properties upon them. Making new examples of luminescent radicals, of which there are only a handful known, will allow us to dig into the fundamental photophysics of doublet states. In other words, we can learn more about the absorptions, emissions, and what all those electrons are doing in a luminescent radical. We hope to learn a little something about designing new persistent radicals, too. We’ll have to find a way to include in our molecules both high luminescence quantum yields and long radical persistence lifetimes.